Amber is the ancient resin of trees and we’re not talking thousands of years here. This resin has gone through a number of changes over millions of years. The result of this transmutation is an exceptional gem with extraordinary properties. Amber has strong connections with the earth and is a grounding stone for higher energies. It is also a powerful healer and cleanser that draws dis-ease from the body and promotes tissue revitalization.

Of all the amber deposits in the world, probably the most famous and certainly the largest is that of the Baltic region representing some 80% of the world’s known amber resource. (The second largest source is in the Dominican Republic) These amber deposits range between 35 to 40 million years old and it is quite fascinating to think that the same type of amber adornment we seek out today has been used and fashioned by humankind since man first roamed the earth. These earliest ‘jewelers’ simply picked up amber pieces from the beach or from the area of amber source trees –specimens probably resembling a pine or spruce tree – growing in large sub tropical forests. 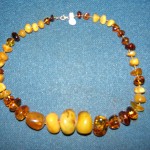 Amber-05The reason for the exudation of the resin is not fully understood, but the world’s major amber deposits are most likely to be a product of insect or fungal assault. For instance, an insect bores a hole into a branch or twig and a stream of resin is exuded to prevent further intrusion and to repair and reinforce the damage done. However, in these particular trees, resin was also exuded within the tree itself forming moats or channels of hardening resin within the wood matrix, perhaps as a reaction to termite or wood boring insect attack, or perhaps not. Whatever was the reason, this was a terrific occurrence as the resulting sticky, uniformly hued, clear-ish resin of many millions of years ago metamorphosed into the beautiful, warm, multi hued gemstone we know and appreciate today. 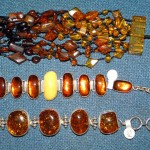 Amber-02The color range of amber is extensive and is described in two ways –turbidity and hue. (Turbidity is the extent to which amber is clear or cloudy.) Usually, the more cloudy the amber, the whiter in color it appears. Turbidity is not the result of any chemical or the effect of any inclusion trapped in the resin. The turbidity is a result of thousands of tiny air bubbles held in the amber, and the size and density of the air bubbles results in different shading. The color range of amber is extraordinarily wide, extending far beyond the typical reddish-yellow we are so familiar with. The color also changes over time due to the effects of oxygen upon the resin. Pieces of fine translucent yellow amber that have been cut and polished for jewelry will gradually darken, becoming red and eventually completely dark. 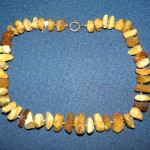 Amber-04Amber has amazing properties. It absorbs negative energies and transmutes them into positive forces that stimulate the body to heal itself. A powerful protector, it links the everyday self to the higher spiritual reality. Psychologically, amber brings stability to life but also motivates by linking what is wished for to the drive to achieve it. Its warm, bright energies translate into a sunny, spontaneous disposition that nevertheless respects tradition, and in doing so can help counteract suicidal or depressive tendencies. 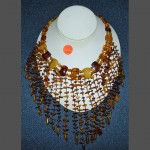 It is certainly mind boggling to think that something created eons ago can be so relevant in today’s world. Amber is an auspicious melding of beauty and rarity with practical application. It is nature’s prehistoric contribution to the wonderful world of the magical and mystical.

There are many imitations of amber, some natural and many synthetic. The natural imitations, known as copal resin, are very closely related to amber but are much less ancient –only about 3 to 4 million years old –and are not fully fossilized. Sometimes plastic substances or laboratory resins are produced to emulate amber. To address this issue, there are several simple tests that can be carried out on amber to check its authenticity:

Amber will remain unaffected by contact with acetone; copal will become tacky.

Amber fluoresces a pale shade of blue under a short-wave UV light.

Rub the specimen vigorously on a soft cloth. True amber may omit a faint resinous fragrance and will also become heavily charged with static electricity and will easily pick up small pieces of loose paper.

One of the most reliable tests is to taste the amber specimen after washing it in mild soapy water and then plain water. Plastics and other common substitutes can easily be identified because of their unpleasant or chemical taste. Amber has hardly any taste at all.

Previous
LOVE
Next
How to Be Happy In an Unhappy Environment
Warning: count(): Parameter must be an array or an object that implements Countable in /home/terryroblhb/public_html/source/wp-includes/class-wp-comment-query.php on line 405

Get Free Updates directly in your inbox. No Spam, arm promise! My Purpose is to live each moment smiling and happy… to be the beacon of light that inspires others… to motivate and help others help themselves, and to create a global environment that promotes love, healing and balance.
More About Me

"Dear Terry, Thank you so much for being so kind & patient. Thank you for showing me & teaching me a humble heart with your insights & wisdom. With Kinder Spirit… "